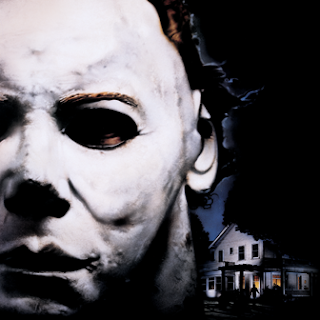 HALLOWEEN: THE WRATH OF MICHAEL MYERS
By Daniel Skye

Michael Myers had one thing in common with Doctor Loomis. He was also a survivor.
Michael survived last Halloween, just as Loomis suspected. A hail of bullets had sent Michael tumbling down an abandoned mineshaft. But bullets never stopped Michael before; they only slowed him down. So the state police decided to throw a little dynamite into the mix.

The blast knocked Michael unconscious and tossed his body from the shaft. A nearby river carried Michael upstream, where a young man nearly tripped over his bullet-riddled torso as he walked home after dark. Bill Tramer had been coming from a Halloween party. His mother begged him not to go. Not after what happened to his brother.

Ben Tramer died walking home from a Halloween party. The police mistook him for somebody else and tried to stop him on his way home. A drunken Ben got startled and stumbled out into the street, where he was struck by an oncoming police car and pinned against the side of a van, which burst into flames on impact.

Bill’s mother implored him to stay home. But Bill didn’t live under her roof anymore, and he didn’t play by her rules. Bill moved out as soon as he was old enough to. He inherited his late aunt’s property and put college on the backburner, started working full-time to keep up with the bills, started seeing his friends less and less. So Bill wasn’t going to turn down a night out and a chance to party with his friends just because his mommy asked him.

Bill examined Michael’s body. He was still breathing, barely. He promptly identified the mask. It was a similar mask that got his brother killed. And everyone in Haddonfield either knew the legend of Michael Myers, or they lived through it.

The mask was infamous, not just in Haddonfield, but throughout America. And Bill realized the mask could be worth a fortune to the right collector.

Michael fell into a deep coma, leaving him in Bill’s clutches. He dragged Michael’s unconscious body to a shed in his secluded backyard, chained him up to a pole like he was an animal (which wasn’t too far from the truth), and left him there to rot.

Bill assumed selling the mask would be easy work. But he couldn’t exactly take out in ad in the local papers. So he held onto the thing for nearly a year, coming across only a few potential bidders he could trust with the knowledge of the mask being in his possession. But none of them would seal the deal. Some would not pay the outrageous price that Bill demanded. Others claimed there was a curse on the mask itself, that it drove Michael to continue slaughtering people. And all of them seemed to question the legality of the situation, and the obvious moral dilemma that accompanied it.

And Bill had been slapped by the same ethical dilemma when the mask fell into his grasp. But his avarice eventually exceeded his compassion and sympathy for the victims. He too had been a victim of Michael Myers when he lost his brother. Bill believed that it was his right to profit off of that suffering.
Stripped of his mask, Michael remained in a coma for almost a year. Michael had played this game before. He knew how to wait, bide his time. And with Halloween right around the corner, he didn’t have to wait much longer. That mask would soon be in his possession again.

Loomis sat at the end of the smoke-filled bar, craving a cigarette.
Ten years, Loomis reminded himself. You kicked that disgusting habit over ten years ago. Have some willpower, for Christ’s sake.

His eyes shifted from his beer to his wristwatch to the door. Brackett was running late. Loomis didn’t want to assume the worst, but he couldn’t help it. Especially around this time of year. Loomis had developed a great aversion to this holiday. His colleagues referred to it as Samhainophobia. But Loomis had coined his own phrase. Myers Syndrome. And Loomis was an ongoing case study.

The door swung open and Leigh Brackett entered, scanning the room for Dr. Loomis and finding him at the end of the bar.

Brackett looked older than Loomis remembered. He was grumpier, fidgety. His slacks were too tight and he kept tugging at the legs of his pans, fidgeting around on his barstool, trying to find a comfortable position. And though he looked older, Loomis couldn’t deny that Brackett looked better than he did. Brackett still had all of his skin. The years had not been kind to either man.

But Brackett still had a lust for revenge. Loomis could almost see it boiling under his skin. His rage was palpable.

Loomis bought him a drink and they let the awkward silence pass.

“Here’s to old friends,” Brackett said and they clanked their frosty mugs together.

“To old friends,” Loomis repeated. “I don’t think this place serves any food besides pretzels. We could go somewhere else for lunch.”

“You know damn well I didn’t come all the way back to Haddonfield for a bite to eat,” Brackett snapped at him. He was a changed man, this much was clear. Losing a daughter will do that to you.

Brackett remembered the quiet, peaceful days of Haddonfield. The bygone era. An era where children were safe to walk unescorted to school. A town where the only criminals were the high school kids selling dope or getting high. Michael Myers changed all of that. The town gained a dark reputation. And Halloween never was the same again.

Brackett urged Loomis to cut to the chase.

“Michael Myers,” was all Loomis had to say.

“You know that isn’t true, sheriff.”

“Don’t call me that. Those days are behind me. And say Michael Myers is alive, what are we going to do about it? Are you going to sit him down and have a talk with him? Another therapy session? That worked great the first time.”

“I’ll admit my conversations with Michael were a bit one-sided.”

“Tell me about it.” Brackett stared off, sipping his beer.

“We can stop him, Leigh. We can make this the last Halloween for Michael Myers.”

There was a moment of silent contemplation before Brackett spoke again. “I’ll do it for Annie.”

They emptied their mugs.

“Did anyone ever tell you that you look like a James Bond villain?”

Tommy Doyle and Lindsey Wallace were inseparable after that tragic, fateful night in 1978. They remained best friends through the years, and started dating in high school. Less than a year after graduation, they were married.

They knew things wouldn’t be easy. They had bills, a mortgage to pay off, and all the other hardships that adulthood would bring. But it didn’t matter so long as they had each other. Tommy worked full-time as an auto mechanic. And Lindsey played the role of the happy housewife. Though she hadn’t told Tommy about the novel she’d been working on in her spare time. A novel detailing Haddonfield’s dark history.

Four more days till Halloween. Meticulously carved jack-o’-lanterns sat on every doorstep. Plastic skeletons danced in every window. Tommy Doyle was always on his guard during this time of year. As soon as he was old enough to purchase and register a firearm, he was down at the gun range practicing his shot.

“You’re sure it was Bill Tramer?” Tommy asked.

“That’s what he said his name was. Tommy, I have a terrible feeling about all this.”

“That makes two of us. Where’s the address you wrote down?”

“Oh, Tommy, please don’t go. Not by yourself. Can’t you call one of your friends to go with you?”

“No. I have to do this alone. If he really has Michael’s mask, that means Michael is still alive. That means everyone in Haddonfield is in danger. I won’t have another repeat of last year.”

Tommy drove to the address Lindsey wrote down. The front door was ajar. Red flag number one, Tommy thought.

He nudged the door open with his sleeve and called out. “Hello? Bill? Anyone?”

He looked down and saw the drops of blood in the foyer. Red flag number two.

Tommy followed the red road through the kitchen, to the back door where the trail seemed to end. He knelt and saw specks of blood splashed across blades of freshly mowed grass. It continued through the backyard, leading to Bill’s shed.

Tommy patted himself down, then remembered his gun was in the glove compartment of his pickup. If Michael’s in there…grab the closest thing you can find and bash his freaking head in, he told himself.

He kicked the door of the shed open and peeked inside. There was another trail of blood leading up to Bill Tramer’s maimed, mutilated corpse. Red flag number three.

Beside Bill’s body was a pile of steel chains. The links were ripped in half.

Michael was loose in Haddonfield. And nobody was safe.

Tommy returned home a ghost of a man. He wiped away the beads of cold sweat that had accumulated on his forehead. He was so distracted, he didn’t even notice the additional car in their driveway. Lindsey was waiting at the door for him.

“We have visitors…” Lindsey said. “Sheriff Brackett and Doctor Loomis.”

“Better put on a pot of coffee,” Tommy told her. “Please,” he added.

“Only ‘cause you said please.”

Tommy joined the two men in the living room. They sat and Tommy heard them out. He waited until they were done to share the latest development in the Michael Myers-Haddonfield saga.

“How are we going to take down Michael Myers? You shot the guy, what, six times? Then tried to blow him up? How the hell can we stop him?”

Anger flashed across his face. He turned red hot with rage.

“We’ll use everything we’ve got. I don’t care what it takes. I want this curse lifted. I want this evil cleansed from Haddonfield. I’ll blow him up again if I have to. I’ll use grenades, a bazooka, a rocket launcher. I’ll drop a nuclear bomb on his frigging head. I’ll bury him at the bottom of the ocean. Whatever it takes.”

“It feels like your sister bit me,” Tina said, clearly vexed.

“It’s okay, Rach. It’s not your fault. Besides, I normally don’t mind it when someone bites me. There’s this one guy who–”

“I’m just going to stop you right there. I’m too sober to listen to any of this. Drinks first.”

They sat at the bar and ordered their drinks; a cocktail for Tina, straight vodka for Rachel. Rachel was finished with her drink and ordering another one before Tina took more than two sips.

“Take it easy, Rach. Pace yourself.”

“Excuse me, Miss Carruthers,” an older woman approached. Rachel recognized her as one of the nurses from Smith’s Grove.

“Yes?” Rachel said, intrigued and somewhat concerned. “Is this about Jamie?”

“Sort of…I started working there when Michael was about 14. Quiet as a mouse. Never said a word. It was unnerving. I knew Dr. Loomis was right, that he needed to be locked away from the rest of society. I knew Dr. Loomis well. And I knew Jamie’s mother.”

“Yes. But you know what her real name was.”

“I’m sorry but where are you going with this?” Tina interjected.

“I want to help Jamie. But if you’re going to help her, you have to start at the source. You need her mother.”

To Be Continued With Part Three: DEATH COMES TO HADDONFIELD
Posted by Randy Romero at 10:47 PM