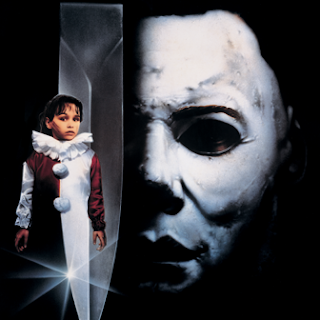 Jamie Lloyd was eight years old, dark brown hair with bangs, pallid skin, and the blackest eyes Smith’s Grove Sanitarium had seen since her uncle was a patient.

But Doctor Loomis saw that it wasn’t too late for Jamie, as was the case with Michael. There was still some good alive inside of Jamie, fighting, trying to ward off the evil that had enveloped her. Loomis was determined to save her, mind and soul. But first, Loomis had unfinished business to attend to.

It wasn’t like Jamie was going anywhere. She hardly left her room. She hardly left her bed. And she never spoke. Not a sigh or a whisper or a groan. The silence was as unnerving as it was relentless. The doctors, the nurses, the staff all actively tried getting her to speak. But they were talking to a shell, a child wrapped in a cocoon of evil. A child devoid of any emotions or sensations.

The door opened and Doctor Hoffman entered alone. Hoffman had been working at Smith’s Grove for twelve years. He never heeded any of Loomis’s warnings. And he certainly wasn’t scared of a little girl. She’s just a child, he thought. What could she possibly do to me?

Jamie motioned with her hands until the doctor realized she was requesting pen and paper. Hoffman handed her his clipboard. He thought twice about the pen, but ultimately handed it over. She jotted something down and flipped it over for Hoffman to read.
WHERE’S LOOMIS? It said.

“Doctor Loomis is unavailable at the moment. I believe he’s taken a brief leave of absence. Don’t worry, he’ll be back.”

She wrote something else down and showed it to Hoffman.

And below that, she had scribbled:

It was just another lazy Saturday afternoon for Lorna Hicks. Lorna was a senior, which meant tons of homework and weekend assignments. But Lorna was a procrastinator, usually putting all her assignments or book reports off until late Sunday afternoon.

And that Saturday was no different. Lorna was sprawled out on the sofa, watching a made-for-TV horror movie. The stations had been airing a lot of fright flicks leading up to Halloween and Lorna was glued to the sofa, getting up only to check on her chocolate chip cookies.

The first batch came perfect, all soft and chewy. She’d burned the second batch after she forgot to set the timer. Smoke filtered out as soon as she opened the oven, setting off the fire alarm. Lorna tossed the tray of charred cookies and opened the windows and the backdoor to air out the kitchen, before returning to the sofa.

She yawned and shut her eyes for a few minutes, listening to the screams on TV and the brum-brum-brum of the killer’s chainsaw. Stupid teenagers, Lorna thought. They can’t outsmart some backwoods, inbred psychopath with an IQ as low as his shoe size? These Hollywood writers have no imagination. If that was me, I’d be out of there so fast. I wouldn’t stick around to let the killer get me.

Lorna opened her eyes and sat up, startled by a creak from the hallway.

“Hello?” Lorna called out. Nobody was supposed to be home. Her dad worked late, and her mom was out shopping for her annual Halloween party, which Lorna dreaded. Adult Halloween parties were the worst to her. Nothing but a bunch of grownups getting drunk, listening to outdated music, and wearing outdated costumes.

“Someone there?” Lorna asked. But the house was quiet again. She muted the television and got up from the sofa, tiptoeing through the hallway. She went back to the kitchen and closed the door, shut all the windows.

Nothing in the kitchen seemed tampered with or out of place. It was probably just the TV, Lorna told herself. Or maybe you just imagined it. Too many horror movies. Don’t let those silly films get to you. You’re smarter than that.

Lorna decided to check the downstairs closets and bathroom just to be safe. To her relief, nobody was hiding in the linen closet with a chainsaw or waiting behind the shower curtain with a knife.

She laughed at herself, shook it off, and returned to the sofa. She turned the volume back up, changed the channel, tried to find something a bit more cheerful.

The phone rang and Lorna leaned over the sofa to reach the end table. She picked up the phone and said, “Hello?”

“Yeah, I mean, I know of him. Everybody knows about what happened to his family.”

“Well, you’re not gonna believe this. They found him at his aunt’s place, all hacked up. Lorna, somebody killed him.”

“Oh my God,” Lorna gasped. “Beth, that’s just eight blocks from here. Who would do such a thing?”

“I don’t know but the police are–”

Lorna put the phone down and a chill rushed down the back of her neck. Someone was in the house with her. She could hear them breathing heavily. It wasn’t the TV, it wasn’t her mind playing tricks on her. Lorna got back up and turned towards the hallway.

“Who’s there?” Lorna cried, the fear beginning to paralyze her body.

Michael sprang up from behind the sofa, burying the butcher knife deep in her chest, the blade slipping between her ribs, piercing her left lung. Michael extracted the blade, and Lorna collapsed to the floor. She tried to crawl away, but she didn’t get far.

Michael didn’t finish the job, leaving Lorna to asphyxiate on her own blood. He didn’t need to finish the job. He already had what he came for.

Even with the earmuffs, the sound of the gun was deafening. The gun had a hell of a kick to it, too. Tommy had been to the range many times in the last year, but Loomis was rusty, and Brackett was rustier. They needed to practice their shots.

“Aim steady,” Tommy instructed them. “Relax, be calm. Block out all the noise. Focus. And pull the trigger.”

Loomis wrapped his finger around the trigger and took time lining up his shot. When he was ready, he fired.

“Bullseye,” Loomis said, a smirk spreading across his lips.

The wail of a police siren startled them all as Meeker pulled up on the range. Meeker rolled the passenger window down and Loomis hobbled toward the car. He’d used a cane for assistance ever since the night Michael first escaped. He wore a long overcoat and black leather gloves to hide the burn scars on his hands.

“Sheriff,” Loomis acknowledged him with a nod.

“Tell me what you know about Bill Tramer.”

“No, I mean his brother, Bill. We found him dead in his backyard. Mutilated. And Lorna Hicks. Her parents found her stabbed to death in their home. Killer used a butcher knife. Took it with him. Sound familiar?”

“What are we up against, Sam?”

“My men will deal with the situation.”

“Your men were slaughtered last year. Would you like a repeat?”

“Yes. This is the former sheriff, Leigh Brackett. And the young man to his right is Tommy Doyle. Tommy was a boy when he first crossed paths with Michael back in ’78. And Leigh lost his daughter, Annie. They know what Michael is capable of. And they’re willing to fight by my side to ensure Michael never returns to Haddonfield again.”

“I’ll need you and your men. But I want them following my lead. I don’t want them getting themselves killed.”

“You think I’m going to let you order my deputies around?”

“I know you will, because you love Haddonfield as much as Leigh, Tommy, or I. And you don’t want any more senseless bloodshed.”

“We’ll talk more about this later.”

Meeker sped away, his tires spitting up bits of gravel.

“Rach, this is crazy. What are you going to tell Jamie?”

“I’m not saying a word to Jamie. And neither are you.”

“Doesn’t she deserve to know her mother is alive?”

“She’ll know when I find her and bring her back to Haddonfield.”

“How do we know that woman was even telling the truth? How would she know where Laurie Strode is hiding?”

“I don’t know, but Laurie Strode may be my only hope. I have to believe it’s true.” Rachel paced back and forth from her bed to her dresser, shoving clothes into a suitcase, not even bothering to fold them. She also packed her father’s Smith & Wesson.

“It’s a 28 hour drive from Haddonfield to Portland,” Tina pointed out.

“You’re right, I better stop for coffee on the way.”

“Rach, you need to slow down. You’re not thinking clearly. Come get drunk with me. There’s this great Halloween party coming up and–”

“Is that your solution for everything? Tina, I have to do this. Please don’t stand in my way.”

“No,” Rachel said emphatically. “I need to do this alone. And Tina, please be careful. Watch your back.”

“Come on, Jamie. You need to eat. You need your strength.” The nurse was preaching to a brick wall. But after a few minutes of begging and pleading, Jamie picked up her fork…

“Thata girl,” the nurse encouraged her.

…And jammed it into her throat.

Jamie ripped the fork out and tossed it aside the way one would discard a used Kleenex. Blood trickled down the woman’s neck. She clutched at her throat, wheezing as she struggled to suck in the air. An alarm sounded. A team of orderlies swarmed around Jamie. Doctor Hoffman ordered them to shoot Jamie up with thorazine and a lock her up in a padded room.

As they hauled Jamie away, a creepy grin edged across her face. And she stopped, tilted her head, and looked back to admire her work.

To Be Continued With Part Four: BOOGEYMAN
Posted by Randy Romero at 10:33 PM